CrossFit Legends Of The Wilderness

I don’t know how to write this, and equally didn’t want to.  Sam passed away last Thursday.  He was driving along Rinconada and Northrise and lost control of his motorcycle.  The 6:30pm class has always had a special place in my heart.  It has its own personality filled with a lot of personalities and characters.  I always got pumped seeing Sam walk through those doors…. I really loved it.  I even have to admit there were so many days where once the clock started the workout, Sam and I would talk to ENTIRE time.  I think he may have did that to trick me and get out of the workout.  I will treasure our conversations.  This was 630:  Sam came in one day with a couple pair of gloves.  So, after the workout he and Mark started to spare… a little bit of boxing and wrestling (It may have been egged on a little by Fermin as well lol).  Well Sam, being a trained killer was obviously going easy on Mark, this was just a sparing exhibition anyways.  And then, Mark hit Sam just a little too hard.  So EVERYONE that stayed to watch made the, “OOOHHH!” sound and then Sam got serious.  It was hilarious.  They ended on the ground and started wrestling like their lives depended on it…. it got funnier and funnier.  Sam always brought in some kind of treat for everyone.  His go-to was gummyworms.  He “Insisted” that you took some, that pretty much implied him shoving them into your hand or mouth as he’s dumping the bag upside down.  One time, he asked my mom what kind of cookies she liked, and brought her her own box from Sprouts the next class.  Sam was genuinely caring, and kind, a force to be reckoned with, and a good friend.  Last month, just before we had to close, my pickup didn’t start and I wrote on here that I was going to be late.  Sam text me if I needed a jump but Jerod was just about to pull up to my house cause I knew he lived close by.  Also, the dumbbell racks we had were donated by Sam (Yes, all three of those huge things).  He also would workout at Fitness One, and saw that they were getting rid of them so Sam, being good ‘ol Sam, paid them BEFORE he even told me and then asked he I needed them.  He was just a good dude that liked helping his friends.  I always just loved watching 6:30 go at it with so much that class had going on… everyone ganging up and picking on Mark (as friends do), Fermin and Sam always a team, Bart just cracking up from it all, getting a text from Sam asking if I needed help getting the airs started in the summers.  I had never done that before I took over at the gym, but my Dad had helped me with one and I figured I could figure it out.  I probably should have asked for more help because they always kept breaking, I but I still blame that they were just really old units.  Sam was as much of a special snow flake as one could be.  He was loved by all and people literally were gravitated by him.  There would be circles around him just BS’ing and having laughs, and everyone just wanted to be around him.  He pulled people in by his charisma and kept them there by his character.  Boy he was a man’s man.  Strong as an Ox and tough like a bear.  Thank you Sam for being a great friend.  Thank you for so many conversations.  Thank you for the workouts we had together and almost getting 500# deadlifts together and then almost killing me with that ammonia salt that seared a hole in my brain.  Thank you for being genuine and at times even transparent.  Thank you for the energy, the hype, and vibes you always brought with you.  Thank you for your generosity and welcoming anyone, newbies and old schoolers, that came into that last class of the day.  Thank you for making the gym better.  Thank you for making me better. 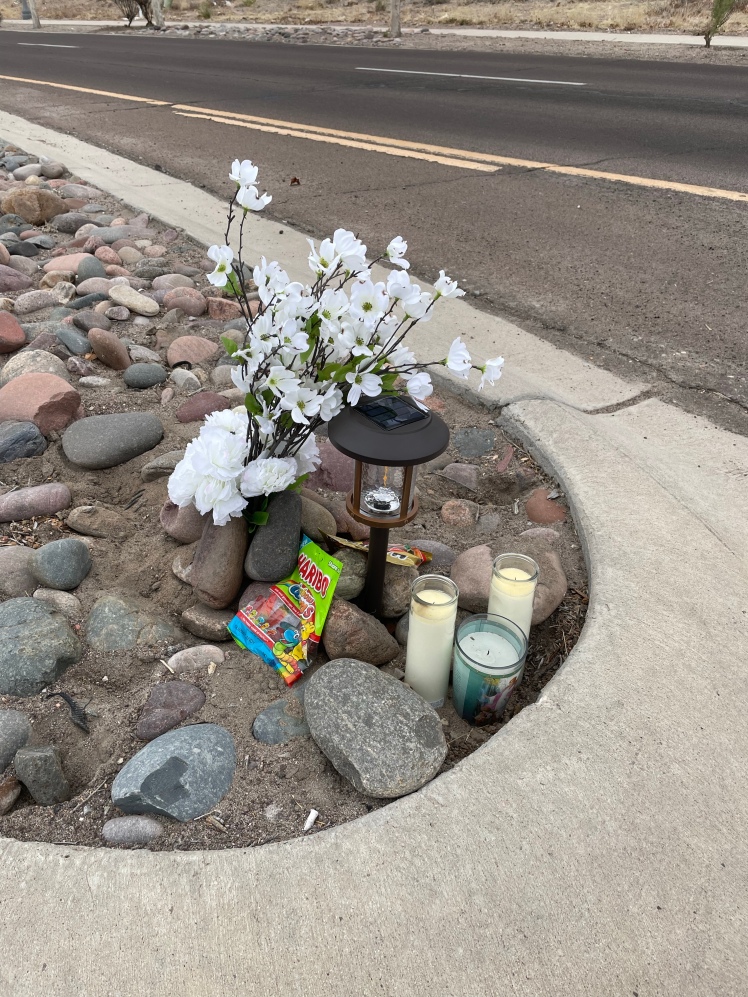 Mark put up some candles and lights at the spot of Sam’s accident.  I put flowers and gummyworms.  If you’d like to add to it, it is on Northrise between Rinconada and Sonoma.

Hero Workouts are workout that are made for individuals that serve or have served in the military or as first responders that have died in the line of duty, and we honor them by giving them a workout and do it in their honor because they are no longer here.  I am making a Legend Workout for Sam.  In that same respect, and as everytime a hero workouts comes up in our programming, this is what we do and how we show respect and give a true Legend honor.  The Legend Workout will be named Sam.  I’d like to get whoever would like to join and if not this Saturday, next Saturday, and do this workout for Sam.  He liked the lifting stuff, strongman implements, and maxing out lol.  I’ll come up with something, but text me please so I can have a ball park number for it.  575-640-1059

I’ve been going through my photos the past couple of days and found some photos and videos I’d like to share of Sam.

When Sam wanted to do something, he did it.  Sam lost a ton of weight!

Sam’s not in this one, but the guys from 6:30 made a bet amongst themselves.  They all put I think 500 dollars (Sam wanted to make it 1,000! lol.  He said it would motivate everyone more) and the winner would get the pot.  Sam won the bet.  Erica went with us and all had dinner at Texas Road House where we announced the winner and stats of everyone that Alex had, very thoroughly, had printed out.  Sam payed for all our meals and gave everyone’s money back.  He just wanted to encourage everyone to make a goal and try and get healthier.  Sam also told our waiter that it was my birthday and made me ride their silly little saddle as all of Texas Road House sang Happy Birthday to me….. it wasn’t my birthday 🙂

Alex made these cupcake for us

Love you buddy.  You will be missed.  May you rest in peace brother.

Knowledge is only information until it is SHARED... then it becomes wisdom